Networking with colleagues is important, especially when studying wide-ranging, migratory raptors like Turkey Vultures.  The species has a distributional range of more than 26 million square kilometers (i.e., about 8 million square miles) that stretches from Canada in the north to southernmost Argentina and Chile in the south, and individual vultures can be in my Pennsylvania backyard one day and in central Florida two weeks later.  Or, in the case of my Canadian colleague Wayne Nelson’s wing-tagged nestling “ANL-yellow,” at a nest in southeastern Alberta in mid-August 2012 and at a zoo in northern Venezuela in mid-January 2013. 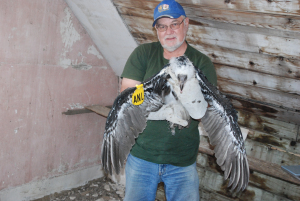 Wayne Nelson took the photo of the bird being held by his colleague Dave Moore at the nest site in Alberta.

We don’t get many reports of wing-tagged Turkey Vultures south of the United States, which is one of the…

This is the website/blog of the Payne County Audubon Society, based in Stillwater, Oklahoma, USA. View more posts